For God’s sake, there are so many alternatives to get over and slow down the aging process by using temporary facial treatments and wearing makeup. These methods might look like a reasonable solution for people suffering from wrinkles and the dark circles around their eyes. But are those methods good for you and your skin? They might be helping you in covering up your aging process to some extent of time. But, what about the distant future and mainly considering old age where the wrinkles and the dark circles take over all around the eyes and almost all the facial area?

There has to be some other way to slow down the aging process to look younger and that too by using the natural process. It’s something like a de-aging potion that we used to see on the Disney shows. Potions like those are mere creations of someone’s imagination. But what if I say that there is something just like the de-aging potion to help you up with the wrinkles and dark circles, unbelievable right? There is something as we described but not an exact magical potion. It’s a beauty and cosmetic product which is used for wrinkle and dark circle treatment and also prescribed by many cosmetic professionals to solve several skin problems like acne, rashes, scars, and wrinkles. 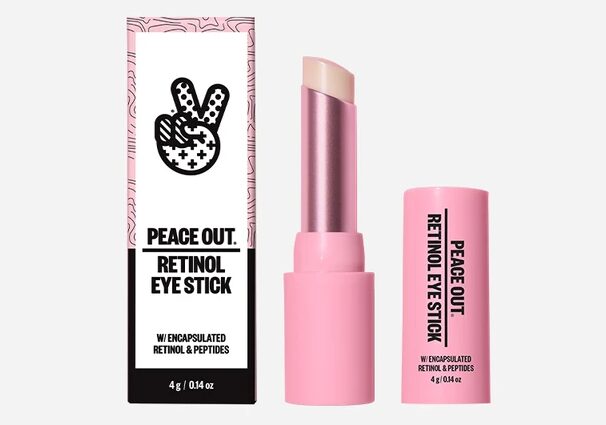 Apart from the several facial problems the retinol is mainly used for the treatment of wrinkles and dark circles under the eyes and on the eyelids for a better skin texture and clear healthy skin over the eyes, the retinol will surely solve your problems regarding the wrinkles and the aging bags on your facial skin.

Retinol is mainly available in two forms for the consumers, one is the medically prescribed formulae of retinol which is also scientifically called Tretinoin or Retinol-A, and the second available was the normal retinol eye stick sold at the nearby drug stores and grocery stores too. The medically prescribed retinol is usually high in the pH level up to 1.0 %, which is used only when prescribed by a medical care professional and the generally available retinol ranges between 0.1% to 0.5% which is better for normal and regular usage without any possible side effects from the compound.

How to use Retinol Eye Stick?

The eyelids are the thinnest skin tissue present in the human body and there is the foremost affected tissue by the aging process by causing the discolorations and darker skin region around the eyes which is a result of rapid cell disintegration due to the aging process.

You have to use the Retinol on your skin only during the night time to avoid any side effects from the natural light as the retinol compound is known to be reactive towards the light and is dysfunctional if used during the daytime due to the lot of light source around you.

The retinol has to be applied on the dry skin only after cleaning the face with soap water and wiping off from any moisture, you have to make sure that you start slow at the beginning stages of using the compound as you have no idea about the possible side effects it mays how on your facial skin.

Just apply the compound in a gentle amount and rub it thoroughly around the eyes where you found there are wrinkles when applied on the skin the retinol compound will increase the growth of collagen which is the key component in the growth of new skin and wipes off the dead skin from the epidermal layer present on the applied areas around the eye. Retinol is most prescribed by medical and cosmetic care professionals because the compound is rich in vitamin-A which is good for treating skin problems. Vitamin A present in the retinol compound will reverse the pigmentation process that’s naturally carried out by the aging of the human body.

The results of using the retinol are not immediately seen on the facial skin, it takes some time to work on with the human skin and delivers a satisfying result, at last, even though the wrinkles get more worst at the starting stages of using the retinol there’s nothing to be worried about as it is a sign that the compound is working.

Retinol eye sticks are completely safe to use on the human body and are very much easy to use.